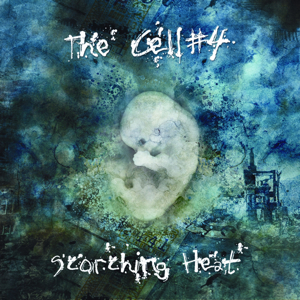 Visual-kei is already the universal language. This movement began with a group of bands was particular about the productions of the visual surface that appeared in the indie rock scene of Japan in the late 1980s. When the whole world was in the midst of the grunge boom, everyone was wearing the dirty damaged jeans and the nel shirt. However, around the same time the visual-kei rock band in Japan erected the dyed colorful hair towards heaven.

The Cell #4 is a Russian quintet band who were influenced from Japanese visual-kei rock. They were formed in Rybinsk in 2006, went close to the style of visual-kei from around 2009. Its musical style fusions the fast and heavy aggressive rock sound such as hardcore punk, heavy metal, and electronic sounds. They deploy a new generation of visual-kei rock spectacularly. In addition, their visuals are the fusion of the traditional style of European and the alternative style of Far Eastern Asia.

This is the first album for The Cell #4. This collection has five main songs and three experimental instrumental songs. It is the eight tracks album. The guitar with heavily distorted tone, plays out the grand twisted riffs. That beat mixed the mechanical industrial sound and the hasty hardcore punk, shows a variety of facial expression. The vocal expresses a deep melancholia and psychedelia, uses both growl and high tone. The pieces of instrumental interlude are making us feel an affinity and closeness for the european progressive rock and the modern electronica.
They mentioned that Japanese bands such as Dir En Grey, X Japan, Mucc, D'espairsRay affected them greatly. And also they have such experiences to share the stage with Japanese band, The Black Love Fantom and The Royal Dead, that visited Russia in live tour. In February, they perform the live on stage with the young-star visual-kei band Plunklock, at their first show of the European tour, in Moscow.

This is the fourth release from mini netlabel Mizou. As long as the music flows, this journey continues.

Our songs aren't trying to force the listener any action, we just give the opportunity to become a part of the world inside our creativity. After listening to it, each one draw their own images. We are trying to interoperate the imagination and emotions with listeners. As a painter draws the picture and each one understand it in their own way. So people who listening to our songs understand it in their own way.

In our music, we do not adhere to the framework, we experiment with sounds, not just musical instruments but also the human voice. Band is giving each song its own unique shade, leaving a piece of soul.

So we paid particular note to our appearance, each member has his unique image that reflects his inner world. Our clothes combine the eastern aesthetics and european insolence.

Every performance of the band captivates the audience. We merge into a single effort to forcing through unlimited emotion, and we do not give a breathe to the audience. It is the unstoppable drive.

The combination of unusual visual images, captivating music and extraordinary energy, so this is The Cell # 4.